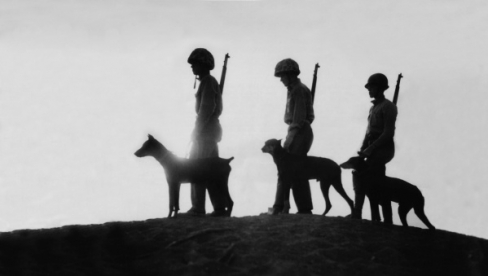 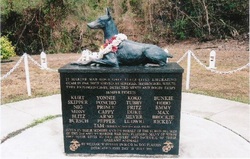 World War II Canine "soldiers" resting place. Guam, an American possession, was
invaded by the Japanese soon after the attack on Pearl Harbor. The small
Pacific  island had little capabilities to defend itself but managed to hold out
for  several days. A brutal almost three year occupation followed. The Marines
returned in 1944 and in their ranks was a full compliment of dogs, the 3rd Dog
Platoon (Devil Dogs) especially trained for jungle warfare. They could search
out the occupiers from their hiding place in the dense overgrowth, detect mines
and traps, alert troops to approaching Japanese while carrying messages,
ammunition and medical supplies. They guarded exhausted sleeping troops in
foxholes preventing infiltration. Among the many Marine casualties were the
exposed handlers of the canine along with some 25 dogs mostly Dobermans. Upon
their deaths, the dogs were taken back to the initial invasion beach at Asan
and  interred in a small section of the Marine Cemetery. Later small white
headstones  with their names were erected and it became known as "The War Dog
Cemetery  Guam." Legacy: Elaborate monuments to war dogs dot the country...March
Air force  Base, Riverside, California has a 16 foot tall granite and bronze
monument  located at their museum. The East Coast National War Dog Memorial is
at Fort  Benning, Georgia located in front of the National Infantry Museum. The
famous  Hartsdale Pet Cemetery, Hartsdale, New York has an early endeavor with
an  impressive monument located on the grounds. Small towns like streamwood,
Illinois has a tribute in the form of a memorial called, "Guardians." The War
Dog Memorial and Cemetery on Guam is the most unique of all the dog memorials
because it encompasses an actual cemetery developed as the animals became
fatalities then interred in one spot during the islands liberation in World War
II. Dr. William W. Putney now a retired Vet who was the commanding officer of
the 3rd Dog Platoon, made a nostalgic visit to Guam in 1989. He was barely able
to find the cemetery as the jungle had reclaimed the site. A personal campaign
persuaded the military commander of the Naval Air Station to designate a new
site and the cemetery with the dog remains and markers was relocated in 1994 to
the Air Station and would now be maintained by the military. Finally with an
ally, the "United Doberman Club' which furnished most of the dogs for the dog
platoon, commissioned a memorial and statue which was created by Susan Bahary,
noted artist of animal themes and a dog enthusiast. The finished monument was
erected and dedicated at the Guam gravesite in 1998 with great fanfare. Dr.
Putney joined his dogs, passing away on March 21, 2003 but was able to see the
completion of his mission. The monument has the chiseled names of the fallen
canines with monikers like Skipper, Missy, Cappy, Silver, KoKo and Blitz.
Interesting footnote...Plans are afoot for a proposed National War Dog Memorial
in Washington D.C. Activist behind the endeavor have circulated a flyer asking
for donations entitled, "Courage at both ends of the leash" with an image of
the  Vietnam War Memorial wall and a German Shepherd sitting and looking on
patiently. 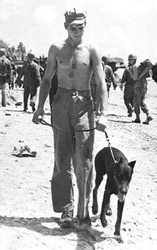 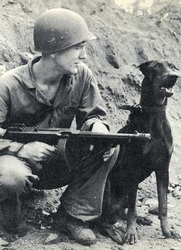 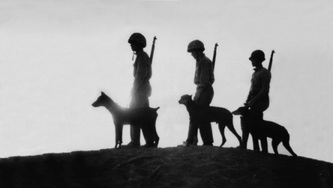 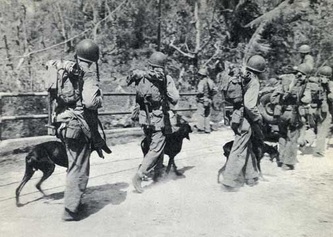 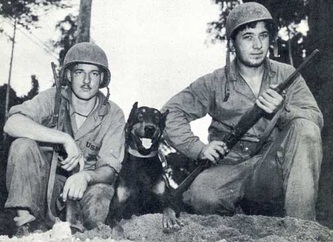 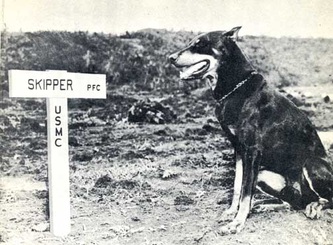 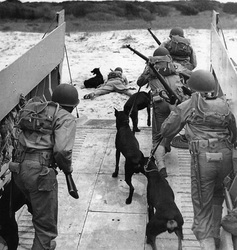