CARING FOR YOUR PUPPYS EARS

Puppies are born with long “hound-dog” ears and tails. Tails are customarily docked (either “Rotweiller style at the first joint or Doberman style at the second joint depending upon the breeder’s preference) and dewclaws are removed by a vet at the age of 3 days. Ears are cropped at 8-12 weeks of age. The ears are sutured after cropping and taped over the head by the vet and then covered with gauze or glued to a piece of Styrofoam between them. The ears heal and, after about 10 days, the sutures are removed and the ear can be taped to begin the process of keeping them upright.

Of course, some owners prefer not to crop the ears but most prefer to do so. If for some reason, you must sell the dog later, its resale price is usually much higher if the ears are cropped and the tail is docked.

Once cropped, they must be “taped” for a couple of months to make them stand. If they are cropped too late, the chances are very good that either one or both ears will fail to stand. In fact, many vets will refuse to crop after 12 weeks of age. The usual fee for cropping is in the neighborhood of $250.

Important tip: If When you take the puppy to the vet for ear cropping, be sure to tell your vet EXACTLY what ear shape you want because vets have their preferences too and those preferences may not match yours. If possible, show them a picture of the ear shape you want and stress it several times or you may be dissatisfied with the result.

1. Sutures will probably be removed from the edge of the ear about 7-10 days after surgery. The ears are usually re-taped 2-3 days after suture removal (check with your vet to know exactly what schedule he or she prefers). During this time, the puppy should be separated from other dogs if possible to prevent them from licking the exposed sutures thus delaying healing and causing excessive scar tissue formation which, in many instances, will prevent the ears from standing properly.

2. During the interval between suture removal and the time re-taping is scheduled, massage the healing edges of the ear twice daily using vaseline as a lubricant. Employ a stretching motion as you massage to help prevent scarring as healing progresses. DO NOT use vaseline on the day of re-taping or the tape will not stick to the ear. The ears must be kept CLEAN and DRY both before and after re-taping. If they get wet after re-taping, remove the tape IMMEDIATELY and either take the dog to the vet for re-taping or, if you are SURE you know how to properly do so, re-tape the ears yourself (see taping instructions below). If you re-tape yourself, DO NOT cover the exposed sutures at the base of the ear.

3. Avoid playing with the puppy excessively while he is learning to perk the ears up. If you play excessively, you puppy will instinctively pull the ears down. Avoid “rough-housing”. Try to get your puppy to pick the ears up as often as possible by making unusual noises or blowing a whistle to get his attention.

4. On rare occasions, a puppy will develop a soft, pliable, thick cartilage which simply does not have the ability to stand and the ears will never stand properly.

5. Some puppies simply are not all that interested in what is going on around them and do not try to work their ears by perking them up. If your puppy displays this behavior, use a silent dog whistle and any other means possible to try to stimulate some interest in perking the ears up.

6. Ears which are continuously wet after taping are very slow to stand. The cartilage loses its rigidity and develops scar tissue formation. Keep the ears CLEAN and DRY!!

7. If your puppy is hyperactive and insists on scratching at the bandages the first week following surgery, give him from ½ of a 5 grain ASPIRIN, not acetaminophen (acetaminophen like that found in Tylenol, IS TOXIC TO A DOG). Many times, the aspirin will reduce inflammation and alleviate the itching associated with the sutures and bandages. Administer up to one full 5 grain aspirin every 4-6 hours.

8. If you work with your puppy and your puppy works with you, the ears should stand well in several weeks to 1 or 2 months with a minimal amount of discomfort to you or to the puppy.

9. Baby socks taped over the rear paws or a hand towel rolled like a donut and pinned around the neck will help prevent the puppy from scratching at its ears and pulling out the sutures. NOTE: ELIZABETHAN COLLARS ARE NOT RECOMMENDED by Spear-Bar Kennels!

Re-taping Your Puppy’s Ears Yourself

Learning to tape your puppy’s ears yourself will save you from having to pay the vet’s office to do it for you. It also helps your puppy become accustomed to being handled. Don’t worry if your first attempt is not as pretty as the vet can do it. You can always start over if you don’t think you’ve done a good job and, with just a little practice, you’ll get quite good at it. Another advantage of knowing how is that it can be done as often as you think it needs to be done (for example if the tape gets wet, soiled or ragged or if you wish to inspect the ears for healing progress or infection). I usually leave the tape on the first time about 3 days then remove it by carefully sliding a blunt ended pair of scissors between the edge of the ear and the tape then slowly peeling the tape from the ears.

I then inspect the ears for dampness and infection. After I have inspected the ears, I next clean them inside and out with warm water and bacterial hand soap (like you wash your own hands with in the bathroom), rinse them thoroughly and let them air dry. Finally, I massage the ears carefully for several minutes along the edges to prevent scar formation and in the middle of the ear with a slight pulling motion from the base of the ear toward the tip while rubbing the ear back and forth between finger and thumb to stimulate circulation and to encourage the cartilage to grow straight.

1. Materials needed:
One roll of ½ inch diameter “backer rod” (available at Home Depot in the hardware section).
One pair of blunt ended scissors.
Two rolls of ½ inch width waterproof first aid tape (waterproof tape helps resist moisture from other dogs should they chew or lick the tape or from water sources the puppy may encounter). If your puppy’s ears are sensitive or if your puppy objects to being handled, you may need a helper to hold the puppy while the taping is performed.

2. Cut a 6 to 8 inch length of the backer rod off the roll and, starting at one end, wrap it with a spiral from one end to the other with the first aid tape to provide the rod with some rigidity. Leave about ¼ inch of the rod uncovered at one end to provide a soft cushion which will not irritate the inside of the puppy’s ear when the rod is inserted. Next, wrap a second spiral layer of tape STICKY SIDE OUT around the rod from one end to the other still leaving the ¼ inch foam rubber end of the rod exposed. This sticky side out layer will help the rod stick to the inside of the puppy’s ear and help it to remain in place. Cut 6 four or five inch lengths of tape off and lightly stick one end of the tape to the edge of the surface area you will be working on so they will quickly available when you are ready for them.

3. Place the foam rubber exposed end of the tape-covered rod into the bottom of the ear well (NOT THE EAR CANAL) then press and wrap the inside and the edges of the ear around the sticky rod so that it sticks to the rod. Stretch the ear upward slightly then press it to the tape so the ear is in a completely erect position. Make sure the inside of the ear makes contact with the sticky rod from top to bottom.

4. OPTIONAL: Place a band of tape stretching from the tip of one ear across the span to the tip of the other ear forming a “bridge” to hold the ears straight up and down. I don’t perform this step for four reasons: First, it is usually not necessary to get the ears to stand properly. Second, it makes it easier for the puppy to remove tape and rods from the ear when it scratches by getting its paw in the area between the skull and the horizontal bridge of tape and literally pushing the tape and rod out of and off the ears. Third, it is an excellent place for other pets to grab with their teeth and tug during play which results in a ruined tape job. Fourth, the puppy may catch it on an obstruction and hurt itself as it tries to pull free. If you decide to use this bridge between the tips of the ears, you may wish to run a “chin strap” strip or two of tape under the puppy’s jaw and up to the rod in each ear on each side then a strip around the ear and the end of the chin strap where it meets the rod to help keep the tape on the ears and the rod in the ears and from being pulled out. Do not place the chin strap so far forward under the puppy’s chin that it prevents free chewing or swallowing movement or so tightly or far back that it can choke the puppy if the bridge becomes entangled on an obstruction or on pulled on by other pets.

5. I then re-tape the ears for another 3 days before repeating the procedures outlined above. I usually extend the period between tapings to 5 days unless it becomes ragged or dirty. Usually 4-8 weeks is sufficient to ensure that the ears will stand but the time may vary. I immediately begin taping again if an ear looks like it is not ready to stand properly. As a rule, with longer cuts, the ears must be taped for longer periods before they stand well than will be necessary with shorter cuts.

Akiles from Xena and Majors 6.4.11 litter 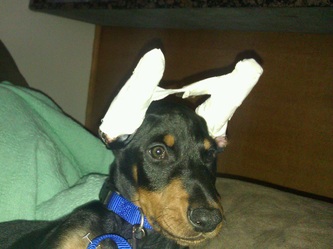